14 Health Benefits of Eating Rhubarb You Should Know

Rhubarb is a kind of herbaceous perennial plant belonging to the Polygonaceae family with big, slightly triangular leaves and long, meaty stalks. The sour rhubarb stalks are frequently used in pies, sauces, and pastries together with other sweet components. Due to the high concentration of oxalic acid and perhaps another undiscovered toxin, the roots and leaves are inedible. Rhubarb cultivars often have red stalks, although they can also have pink or green ones. The rhubarb is sweeter the redder the stalk is. rhubarb

Therefore, it should come as no surprise that this colorful vegetable (more on that later) has been a staple of our meals for so long. But how much do you actually know about this underappreciated treasure, despite its lasting popularity?

Since rhubarb thrives best in colder climates, it is frequently produced in Northeast Asia’s mountainous areas, particularly in China, where it first appeared. Its roots were formerly gathered for medicinal purposes. The Silk Road gradually spread throughout Europe, and through European colonialism, it eventually made its way to the Americas.

Even the third president of the United States, Thomas Jefferson, is reported to have enjoyed organic rhubarb and included it in his sizable herb and vegetable garden.

Rhubarb is a standout crop throughout the cooler seasons because of its distinctive flavor. But many people are unaware of the rhubarb’s tremendous nutritional value as a source of vitamins and minerals.

Rhubarb is high in dietary fiber and low in calories and fat. Vitamin C, vitamin K, calcium, potassium, manganese, and the B-complex vitamins are among the nutrients, minerals, and vitamins that are particularly abundant in rhubarb stalks.

The presence of antioxidants like lycopene and anthocyanin is what gives the stalks their red color. Additionally, rhubarb contains glycosides, including rhein, glucorhein, and emodin, which have laxative and cathartic effects.

Here are 14 interesting health benefits of eating rhubarb that you probably didn’t know:

1. Good for teeth and bones

Calcium from rhubarb is a useful source for teeth and bones, preventing bone softening and tooth loss.

Rhubarb is a great source of vitamin C, which is essential for creating collagen, the structural component of bodily tissue required for immunity and blood vessel repair and synthesis.

Rhubarb contains polyphenols, which may be used to its advantage by baking it in an oven to generate heat, which may help eliminate cancer cells.

The substance that gives rhubarb stems their distinctive red color, physcion (also known as parietin), has been investigated as a potential anti-cancer treatment.

In one investigation on animals, it was discovered that physcion eliminated 50% of the leukemia cells in just two days. Additionally, it was shown that a modified version of physcion is effective at halting the formation of tumors in mice that had received an injection of human cancer cells.

While the results are encouraging, further human research must still be done before rhubarb may be used as the main cancer therapy, according to experts. However, as rhubarb is completely safe to eat, including it in your diet as a natural supplement might be beneficial for prevention. 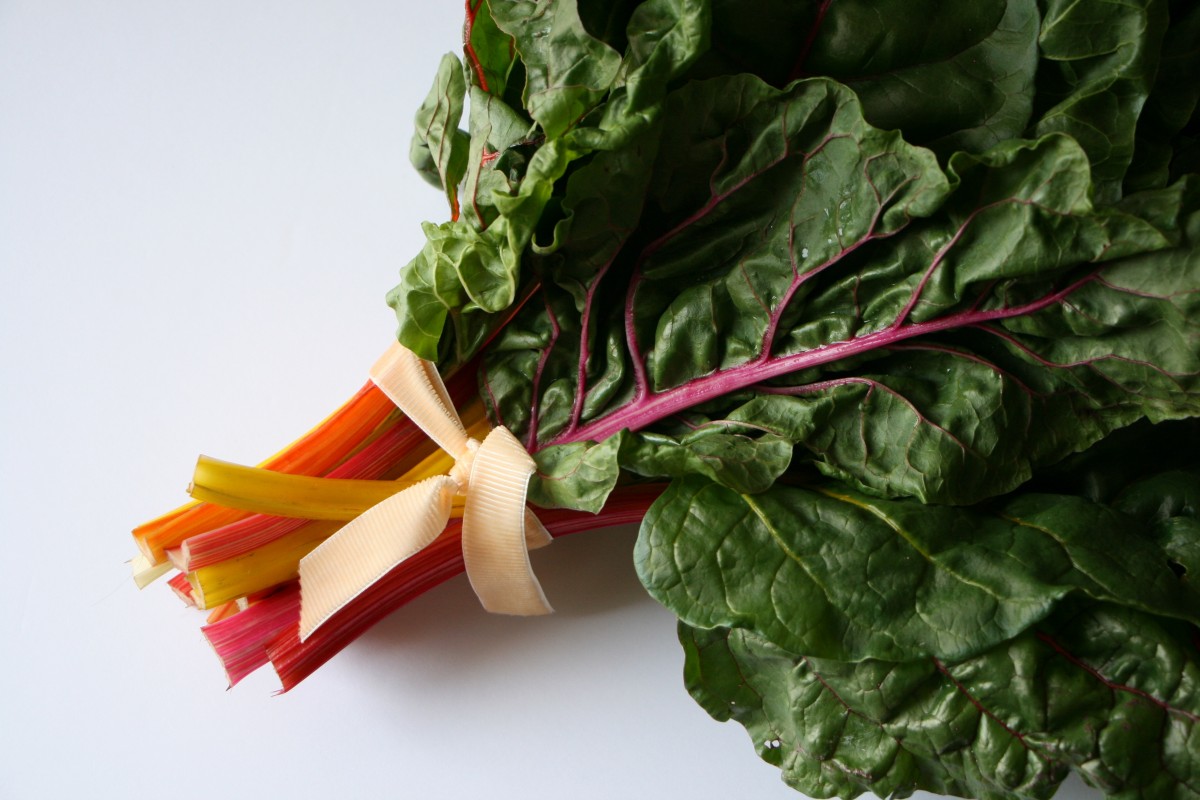 The stalks of rhubarb are a great source of fiber. A 100-gram serving of organic rhubarb has around 1.8 grams of fiber. Men with elevated cholesterol were required to take 27 grams of rhubarb stalks daily in one clinical research.

Lycopene and anthocyanin are two potent antioxidants found in rhubarb that support the health of the heart, eyes, and immune system.

7. Rich in Vitamin A

Red stalks are higher in vitamin A than green ones. The stalks also contain trace quantities of lutein, zeaxanthin, and beta-carotene, which the body uses to make vitamin A.

The health of skin and mucous membranes depends on vitamin A, a potent antioxidant found in nature. Additionally, it promotes healthy vision and delays the onset of age-related macular degeneration.

Rhubarb is excellent for those who wish to shed extra pounds since it increases the metabolic rate in the body. Rhubarb is a fantastic source of fiber, which effectively decreases cholesterol levels, as was already noted. Rhubarb can hasten the weight-loss process just based on this.

In addition, rhubarb contains a lot of catechins, a substance also present in green tea that is believed to improve metabolism. Another quality that makes it the ideal weight loss partner is its laxative effect.

Potassium, which is found in abundance in rhubarb, is essential for controlling the body’s fluid balance, which in turn lowers blood pressure.

Rhubarb contains vitamin K, which may help men better withstand diabetes by delaying the start and progression of insulin resistance in males. Vitamin K is a crucial substance that aids in blood coagulation, bone health, and the prevention of liver and prostate cancer.

11. Prevents harm to your brain

One of the numerous antioxidant-rich superfoods is rhubarb. Because of this, rhubarb is able to combat free radicals and unstable atoms that damage and age our cells, particularly those in our neurological systems.

Vitamin K, which is abundant in rhubarb, protects our brain cells from harm. It was discovered in one study that rhubarb extract reduced radiation-induced lactate dehydrogenase release and DNA breakage in neural cultures from rat embryos. These two mechanisms quicken apoptosis (programmed cell death, which happens at the end of the cellular life cycle).

As a result of this protective quality, rhubarb has the ability to combat neurodegenerative conditions including Alzheimer’s, Dementia, and Parkinson’s. The capacity to combat oxidative stress implies that rhubarb can help protect our memory and ability to remember knowledge.

Vitamin A, a naturally occurring substance that is believed to slow down the aging process by neutralizing free radicals, is one of the numerous antioxidants you may obtain from rhubarb. Rhubarb can help you keep your skin looking young and radiant by shielding it from free radical damage.

Oxalic acid, a substance that can give hair a light brown or golden tint, is also present in rhubarb. Oxalic acid, like purple shampoos, can extend the life of colored hair for those who already have it. For those who want color but are allergic to the chemicals commonly found in hair colors and bleach, rhubarb is the ideal option.

Add three teaspoons of rhubarb root to two cups of boiling water to make rhubarb hair dye. Let this combination sit for the next day. To get all-natural hair color, drain this mixture and use it to rinse your hair.

It was initially cultivated in ancient China for this purpose, which is what rhubarb is best known for.

Due to its high fiber content, which helps facilitate easier digestion, it is frequently used as a cure for constipation. In one Chinese trial, rhubarb was given to burn victims to see if it was effective in reducing stomach pain and fostering a healthy digestive system. It was discovered that rhubarb might strengthen the gut wall’s defenses by secreting more digestive hormones.

Therefore, rhubarb not only promotes healthy digestion but also shields the gut wall from harm. You could consider including rhubarb in your diet if you have a sensitive stomach.

The term “superfood” is appropriate for rhubarb. Antioxidants, vitamins, and minerals abundant in it can support the body’s defense mechanisms against conditions including cancer and Alzheimer’s. Additionally, it has a long history of usage in treating skin diseases topically as well as mild ailments like diarrhea and constipation.

But just like with everything nice in life, having too much of anything may be harmful, even rhubarb. Avoid ingesting excessive amounts of rhubarb if you’re a child, a pregnant woman, or have a liver or kidney ailment since it can be dangerous to you, as some of the health benefits of eating rhubarb are shared with you.

What Are The 23 Major Benefits of Eating Spirulina

What are some of the benefits of eating spirulina everyday? Cyanobacterial biomass known as spirulina is edible to both humans and animals. Arthrospira platensis, A. […]

9 Proven Benefits of Eating Kiwis with Health and Nutrition Facts

The kiwi fruit, scientific name Antinidia chinensis is a common salad ingredient and there are a lot of benefits of eating kiwis. Apart from its […]

What are some of the best food sources for antioxidants? Compounds called antioxidants are present in many meals. These substances aid the body’s defense mechanism […]